And she can DANCE!


I didn't know what to do when a young, independent/ freelance dancer came up to me, after taking class together and she said, "Ohmygod! I can't believe it. I mean... you have boobs. And an ass. And you can DANCE! Wow, you can dance! and you are! I mean, you're doing it! (insert excited tone, raised eyebrows, and a sigh). Thank you! You give me hope... I mean... you're not super skinny, but you're beautiful!"

Truth... well, in some of that. (I question the whole "you're beautiful" part, but I've also spent close to three decades staring at myself in the mirror and trying to correct anything that was "wrong" - be it placement, or accessories, or silhouette, or...........)

But here's where I'm going to bleed a little bit and admit that, although I know that young dancer meant her comments to be a compliment, and meant to provide me with a sense of pride that I inspired her, in honesty, I'm still not sure how to take them.

When I first heard Dance: 10, Looks: 3, I was quite confused. As a budding ballerina, I didn't understand why anyone would want big boobs or an ass. They don't quite fit into a corset and tutu appropriately. (Did I really just write that? Yep... welcome to my 10-year-old self. She still sneaks into the conversation). Dancers, at least as I had seen on the concert dance stage in ballet and modern dance were tiny and thin. They didn't have the tight muscular body that I had, or would continue to grow into. So, (yes, again, at 10, about the same time I was building dance studios out of Legos), I began my tumultuous relationship with food, exercise, cultural norms, and my body.

Many "normal" people are surprised to hear me admit that... but we all have our frustrations and vices. We all have something that we don't like about ourselves or want to fix. We're human... we're not perfect. (Despite what advertisements and photo-editing software want us to think).

But... there is so much beauty in imperfection. And beauty in diversity. And the unforgiving, un-apologetic presence of the body on the concert dance stage.

I write this after experiencing the former-Cunningham company's Dancing around the Bride at the Philadelphia Museum of Art. The dancers were beautiful. Almost flawless in their execution of the demanding technique. (On a floor that didn't seem sprung and after months of performances in a cold room... in unitards!)

Their bodies were beautiful. And all different. One had a longer torso and rounder thighs. One was shorter. One had almost awkwardly long legs and a long neck. But each of them had learned how to negotiate with their bodies in this particular technique. And they un-apologetically wore the unforgiving unitard in various solid colors. (This is a trademark of Cunningham.)

In a conversation with a dance scholar after the performance, she remarked to me - "Their bodies were so beautiful - and so different! I loved that! They weren't anything alike!"

She's also a lifelong dancer with her own body stories... but so right.

Everybody can dance. Everybody does dance. And the professional dancing body on stage... well... 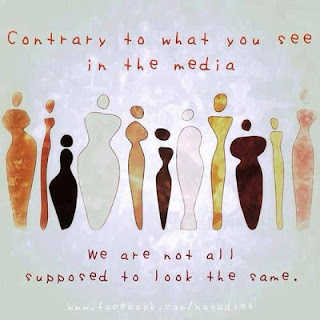 
(And thank you to the former-Cunningham company, the dancers and directors, PMA, Bowerbird...)


(This post was originally created in January, but saved for this week. This week is National Eating Disorder Awareness week. And, even though I know the conversation is important, I still am a bit nervous about posting my thoughts.)
Posted by Jessica C. Warchal-King at 7:48 AM