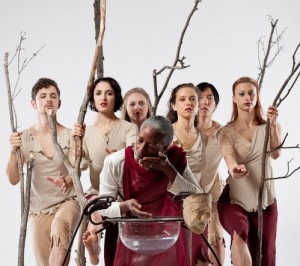 Posted by Jessica C. Warchal-King at 12:11 PM No comments:

The above story is about Bill Weir, a journalist for Nightline, doing a routine story and discovering a heart defect that could have cut his life short. In the story, he says, "Know your body."

Knowing your body is more than just exercising and eating right. It's about genuinely having a relationship with your body; with all of your bodies. Your intellectual body, your kinesthetic body, your emotional body, your physical body, your energetic body... all of these exist in different forms, but they are YOUR BODY. (And my body, but I'm using Weir's words, here).

Dance is such a deeply integrated way to know many of these bodies. It is a way to know the self. And the self in relationship to the larger Universe. or universe.

Dance is about knowing the body in space. About knowing the muscles that work to make the body move. About translating emotion through the physical form. About recognizing emotional activity as it moves through the kinesphere. About negotiating time. About deciphering poetry. About understanding numbers and math and physics.

The microcosm of the universe.

Strangely enough, the more I learn, the more I turn back to that initial principal. (New readers, I encourage you to dive into the musings of 2010 for more information on the body as a microcosm of the universe.)

Take care of our bodies. Respect our bodies. Be honest with our bodies and our interactions. Know yourself, Know ourselves... Know your body.
Posted by Jessica C. Warchal-King at 5:44 PM No comments:

NGPP is performing Sunday, 1/22/2012 at the Painted Bride Arts Center as part of nEW Festival's DanceHouse.

information about the performance:
http://newfestival.blogspot.com/

and get your tickets here:
http://www.paintedbride.org/events/new-festival/
Posted by Jessica C. Warchal-King at 7:03 PM No comments:

A year in Dance

Nora Gibson received a wonderful write up in the Broad Street Review. Check out this link:
http://www.broadstreetreview.com/index.php/main/article/critics_choice_dance_highlights_of_2011/

I appreciate being a part of this process. Thanks, Nora! And thanks, Merilyn!
Posted by Jessica C. Warchal-King at 1:45 PM No comments:

Kun-Yang Lin/Dancers will be performing excerpts of Beyond the Bones at APAP this Saturday in NYC. If you're in the area, stop by!

Posted by Jessica C. Warchal-King at 6:38 AM No comments:

Another turn of the pages. another winding of the clock. another trip around the sun.
Welcome 2012!

I am grateful for the new friends, opportunities, and adventures that 2011 brought. Thank you.

I wish everyone a safe and exciting New Year, full of joy.
Posted by Jessica C. Warchal-King at 12:13 PM No comments: