This week at the Painted Bride!

The Nora Gibson Performance Project is performing this week at the Painted Bride Arts Center.

Ties that Bind is an evening of dance shared by choreographers Jennifer Morley, Olive Prince, and Nora Gibson.

Here's the link for tickets:
http://www.paintedbride.org/events/tiesthatbind/ 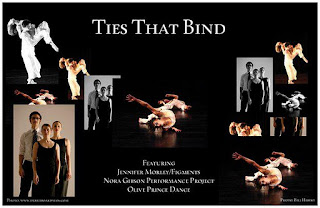 Posted by Jessica C. Warchal-King at 5:08 PM No comments:

I have cool friends.

Check out this review of Kirsten Kashock's Sleight. And then get the book if you haven't already! 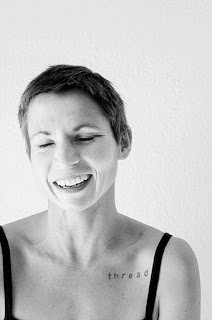 Posted by Jessica C. Warchal-King at 1:45 PM No comments:

Francois le Roux is also know as the HA!Man. His website states that "Ha! (is) the breath that reconciles body and mind, opening a third dimension..."

Last year, I had the opportunity to see "Ha! Breath of Life" at the Polynesian Cultural Center in Hawaii. The youtube video states it's a stage spectacle. And that it is, but there's an element to the mythology that stuck a cord in me and the work that I do with Kun-Yang. The Ha is the breath energy. The flow. The force that connects us all. Since then, I've been processing these philosophies within my own dance practices, my performance practices, and my life practice.

Sunday. November 20th. 3:30pm. Chi Movement Arts Center. ExHale. (Yes, in accordance with InHale). After 45 minutes of an intricate solo performance, Francois pauses. He's gripped the soul of the cello. Danced across an electric keyboard with his fingers. Whistled. Chanted. Layered his music and his body over. and over. and over again. Peering into the audience, he asks for questions.

"Where do you get your inspiration?"

He turns his back to his inquisitor, sticks his thumb out, and points to his sacrum. At first, I think this is a joke. From speaking to him before the show, I know he has a sense of humor. But he's not pointing to his butt. He's genuinely pointing to his sacrum. Well, a point just below his sacrum. And responds, "From here. From my core. That's where I get my inspiration."

The academic in me that spent two years researching Tantric Hinduism and the chakras is reeling. (See earlier posts to catch up). Seriously. This is from where one grounds. Without grounding, further movement, enlightenment, understanding, health, relationships.... cannot occur. And he's acknowledging this physical place - or this energetic place - or whatever the space in between is. It's the place where researchers have located one of the important grounding energetic sites. This is where martial artists, professional Western athletes, dancers, runners... are trained from which to move. To act. To listen and respond. It's not just artistic... Francois is so (unforgivably) clear that this is from where he moves and creates. From his core. (and it has nothing to do with his stomach or strengthening with a giant ball).

He speaks about listening to his surroundings. To staying true to the moment of the work. To creating as a form of awareness and response. Of paying attention to the self.

As fate would have it, Francois came to KYL/D as the company is continuing to discuss our practice. Although, I'm not sure that fate and listening to the universe are separate elements. It is reassuring to see the importance of artistic practice, of listening, of being aware, is not unique, but a universal human truth. I witnessed this in Indonesia with Miroto and the other artists performing at JIPA. And now again with Francois who is on tour from South Africa.

Thank you, Francois and thank you KYL/D for the opportunity to share and experience.

There is so much to be grateful for. Thank you.

Thank you, InHale and KYL/D

Thank you to the InHale artists - the choreographers and your dancers. Thank you to the amazing crew. Thank you to Ken, Kun-Yang and Kun-Yang Lin/Dancers for continuing to trust and believe in this process, and allowing it to happen at the Chi Movement Arts Center. Thank you to all of the volunteers from past performances who set the bar high... higher... and higher. Each performance and each year brings growth and strength in a way that makes so much sense. As though the universe has a very clear game plan for development.

I am always impressed by the strength of InHale participants. The craft of choreography is so clear. The design of the space is so defined. The skill of the dancer's technique and execution is... I need to find another word for strong but after being in the studio/theatre all day, I am at a loss. Twitter is correct - SoRight. (But you have to read this as sooooooooRIGHT!)

And I could go on... but you really should experience it for yourself. Our next performance series will be in January. Stay tuned...
Posted by Jessica C. Warchal-King at 8:37 PM No comments:

We're into year four of the InHale Performance Series and we're going strong! The work we receive continues to be very interesting, complex, and sophsiticated. We're getting submissions from all over the east coast. InHale is a wonderful way for not only me to get to know more artists, but for the artists to interact with each other and for the Philly community to see what's happening in the rest of the region.

So, stop by tonight. Here's a link to the promo video:
http://www.youtube.com/watch?v=lElKU3W5gao

Posted by Jessica C. Warchal-King at 5:18 AM No comments:

Happy Veterans's Day. Thank you to all of those who served and protected.

It is because of you that I have the opportunity to write and speak openly. To dance joyfully. To create my art freely.

It is because of your sacrifices that I can recognize my possibilities.

Thank you is not enough. But please know that some of us are aware, even if we don't understand. 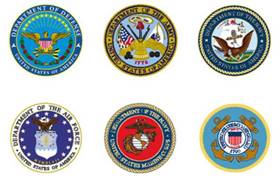 Posted by Jessica C. Warchal-King at 7:57 PM No comments:

From "Chronicles of a Love Junkie" 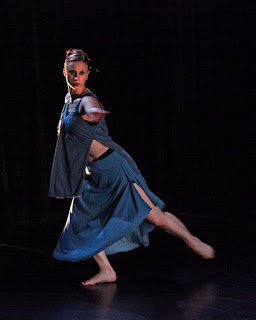 JANIS BRENNER has toured in 33 countries and is recognized as a "singular performer" with a multifaceted artistic range. Honors/grants include: a NY Dance & Performance Award (a "Bessie") for her performance in Meredith Monk's "The Politics of Quiet", Lester Horton Award for Choreography in L.A., NY Foundation for the Arts Fellowship, The Fund for US Artists at International Festivals,  The Trust for Mutual Understanding, UNESCO and a commission for the interdisciplinary work, "The Memory Project", from the Whitney Museum of American Art. Her work has been commissioned/restaged on more than 45 companies and colleges. She performed with Meredith Monk and Vocal Ensemble from 1990-2005 (recording on ECM Records). Ms. Brenner was with the Murray Louis Dance Company from 1977-84 and worked with Rudolf Nureyev, Placido Domingo, Dave Brubeck Quartet, Joseph Papp, Bat Sheva Dance Company in Israel, and Alwin Nikolais. Janis Brenner & Dancers has performed throughout the U.S., Asia, and Europe since 1989 and has been presented by leading NY organizations. Brenner is a sought-after Master Teacher conducting workshops and residencies in dance technique, improvisation, composition, repertory and voice/movement integration throughout the world.  KYL/D is honored to host Janis, who also was the original vocal coach and lead singer in BEYOND THE BONES production in NYC.  Workshop participants may be invited to perform BEYOND THE BONES with KYL/D in March 2012.
Chi Movement Arts Center, home of Kun-Yang Lin/Dancers
1316 S 9th St
Philadelphia, PA 19147
(one block south of Pat's and Geno's cheese steak giants, between Wharton and Reed)
267-687-3739
kunyanglin.org
Posted by Jessica C. Warchal-King at 8:13 PM No comments:

Here's a link to an article I wrote for the Dance Journal. Again, thank you Steve Weiss, Ken, Kun-Yang, Janet, Olive, Jenn, Eiren, the board and supporters of KYL/D, the JIPA volunteers, my parents, my family, and (of course), Justin, for making all of this possible. There are so many people to thank and I am so grateful! But, take a read for yourself.
http://philadelphiadance.org/blog/2011/11/09/investigating-quietness-kun-yang-lin-dancers-on-tour-in-indonesia/

Posted by Jessica C. Warchal-King at 8:04 PM No comments:

Chronicles of a Love Junkie

and a picture by Bill H.: 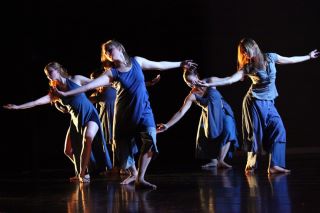 And a picture of the poster: 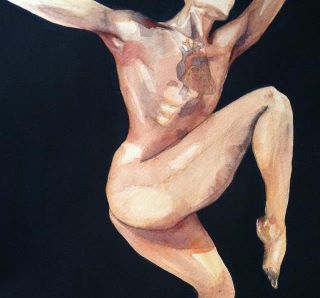 It's a really incredible show!
Posted by Jessica C. Warchal-King at 8:01 PM No comments: